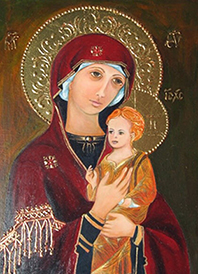 My interest in icons was inspired by past life memories of working as an icon writer.  I was shown how behind every icon there is a sacred geometric form.  Icon writers used to meditate on such forms until they had stilled their mind enough for the inspired image to come forth. They became vessels that could receive illuminations of holiness.  Although images and symbols are fixed, they are in reality a process that connects the physical with the corresponding inner and invisible worlds.

Traditionally icons were regarded as being fundamental to prayer.  The process of using an icon for prayer is broken down into three parts – theory, practice and contemplation.  A student would study the theory behind the image they were drawn to explore.  This is the domain of knowledge or mental labour.  The image was then used to focus and still the mind to penetrate the inner mind accessing the deeper love-wisdom nature within the form. This was followed by a period of contemplation where every aspect of the process and its effect on the student’s life was observed.